Skip to content
Posted on February 24, 2018January 25, 2020 by Jessica Kantrowitz Posted in Peripatetics 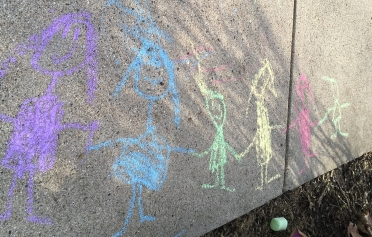 Last week was February vacation for Boston public schools, so I had the six year old in addition to her two year old brother. I call them Louise and Manny when I write about them, and Louise thinks that’s sneaky perfection. Caring for a six year old requires me to be more of the kind of nanny you read about in The Babysitter’s Club, who shows up with supplies and a plan. Normally I’m the kind of nanny whose plan is mainly to go outside and take it from there. This works really well with babies and toddlers, whose main job is to notice things, and we spend pleasant days meandering around Boston’s many parks and cafes having conversation like,

But I can be a fun Super Nanny when it’s called for, so I showed up Tuesday morning with bubbles, birdseed, sidewalk chalk, and a plan. I got Manny diapered and dressed while Louise dressed herself, then I put Louise’s hair into a pony tail.

“I like how you did it a little on the side!” she said, and I pretended I’d done that on purpose. We grabbed light jackets and sun hats, because it was already in the 60s, and getting warmer by the minute, and headed to the playground. I set my sidewalk chalk — big, chunky pastel pieces — out on the path and reminded Louise that I share it with all the kids.

“One time I forgot the chalk,” I told her, “And when I came back for it later, the kids had decorated this whole path, all the way around the playground.”

“Wow, the whole thing?” she asked.

There were lots of kids there, and as I followed Manny around making sure he didn’t fall off of the play structures, I realized that several of them were not being watched as carefully as mine. I don’t judge other caregivers for this. I stay close to the kids I nanny because I’m their nanny and it’s my job, but I don’t think they really need such close supervision. Certainly we children of the 70s played outside with only occasional check-ins from our parents, till the sun set or we were called in for dinner.

One of the less-watched children was an adorable toddler with wrap-around glasses, not more than two years old, if that. I smiled at him when we crossed paths, and he babbled back with pre-language syllables, easily climbing the stairs by himself as I hovered over Manny.

Another of the less-watched children was a three year old named Becca, as she told me when she came over to ask if she can use the chalk. Louise decided Becca actually did need supervision with the chalk, so she followed her over and the two started drawing together.

A couple of minutes later, Becca came over to me and said, “Excuse me, excuse me, he’s trying to hit us with a stick,” and I saw that the toddler had a small stick he was flailing around.

“Oh,” I said, “Well he’s just little, try to stay away from him.” I didn’t feel I had the right to actually take the stick from him, even though Becca seemed to have granted me the authority of a teacher, by virtue of my ownership of the chalk. I took out the birdseed and Manny and I started walking around looking for sparrows to feed. A couple of minutes later I looked around for Louise and saw that she, Becca, and another girl had opened the playground gate and were collecting large sticks and bringing them back in.

“No, guys, no sticks in the playground,” I said, finally accepting my role as Chalk-Imbued Leader.

“But he’s hitting us with a stick, so we need sticks to fight back!” Becca exclaimed.

“No,” I say firmly, shaking my head and corralling them back out the gate, “We need less sticks in this situation, not more sticks.”

Just then the spectacled toddler noticed the open gate and dashed out. I dashed after him and herded him gently back into the playground, then closed the gate.

The children ran off, weaponless, and I turned my face to the sunshine streaming down through the leafless oaks and maples. Winter trees, summer sun. For a moment I closed my eyes and let the kids wander as they would, while I became just another fellow creature out in the fresh, clean air, savoring the brief reprieve from the New England cold. I became my younger self, out wandering the neighborhood after school, free to explore and imagine all I wanted, as long as I came home in time for supper. Then I opened my eyes and turned again into Super Nanny, catching up to Manny and calling to Louise to come eat the snack of crackers and strawberries I’d prepared.

One thought on “We need less sticks, or, the one with the chalk is in charge”

Remnants of Ian on the Cape and Islands, along with remnants of my tired mind and spirit.
Fall session starts in just one week! Sharpen your pencils, get your notebooks ready, bring a virtual apple for the teacher! We’re going to write this October!
Coffee isn’t enough today—I need coffee in a queer little orange mug designed by @emmykegler.
She’s trying so hard to keep us safe, poor thing.
I wrote you a poem.
I wrote you a poem.

Facebook’s still around, too

Facebook’s still around, too